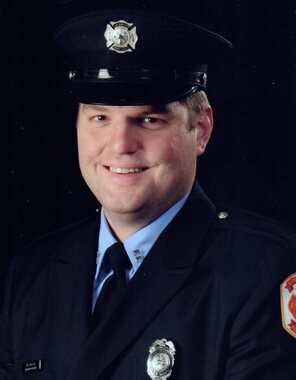 Lt. Eric Hosette 33, of Charlotte, made the ultimate sacrifice in the line of duty on Saturday, January 5, 2019 at a grain bin explosion. Eric was a 2003 graduate of Camanche High School. He later attended the Trinity School of Nursing for his paramedic certification. Most recently attended Waldorf College to attain his AA in Fire Science. Eric’s lifelong dream was to be a firefighter and started as a volunteer with the Camanche Fire Department from 2003-2012. He joined the Clinton Fire Department in September of 2006 and was promoted to Lieutenant in August of 2017. Eric was also a member of the Charlotte Fire Department starting in 2012, where he was promoted to Chief. Lt. Hosette will forever be remembered as a true hero who answered his final call doing what he loved to do and knew that his fellow firefighters would be ready to “take it from here.” Thank you for your Sacrifice Lt. Eric Hosette. God bless you and may you rest in peace.